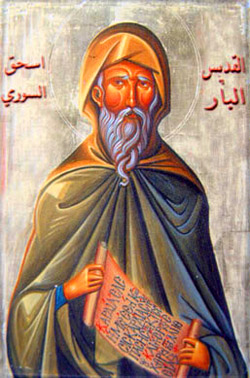 "The only way that a man who wishes to be wise in the eyes of God can do so is to become a fool to the world and a despiser of human glory."

"The passions are like dogs accustomed to lick blood in butchers' shops. When these are barred from what their habit feeds on, they stand in front of the doors and howl until the force of their previous custom is spent."

"The path of God is a daily cross. No one has ascended into Heaven by means of ease, for we know where the way of ease leads and how it ends."

"The recompense is not given for labor but for humility. He who maltreats the latter loses the former."

"The saints in heaven will not supplicate with prayer when their intellects have been consumed up by the Spirit, but rather with awe struck wonder they dwell in that gladdening glory."

"There is no knowledge that is not impoverished, however rich it should be; but heaven and earth cannot contain the treasures of faith."

"There is no prayer so quickly heard as the prayer whereby a man asks to be reconciled with those who are wroth with him. For when he charges himself with the offence, this prayer is immediately answered."

"There is nothing which even Satan fears so much as prayer that is offered during vigilance at night. And even if it is offered with distraction, it does not return empty, unless perhaps that which is asked for is unsuitable. Before the war begins, seek after your ally; before you fall ill, seek out your physician; and before grievous things come upon you, pray, and in the time of your tribulations you will find Him, and He will hearken to you."

"There is nothing which even Satan fears so much as prayer that is offered during vigilance at night. And even if it is offered with distraction, it does not return empty, unless perhaps that which is asked for is unsuitable."

"This is the fruit of humility. And once a person has become humble, straightaway mercy encircles and embraces him; and once mercy has approached, immediately his heart becomes aware of God helping him. Then his heart is filled with faith, and from this he understands that prayer is the haven of help, the fountain of salvation, a treasury of assurance, a saving anchor in time of storm, a source of recovery at times of sickness, a staff for the weak, a shelter in time of trials, an illumination to those in darkness. [paraphrased]"

"This life has been given to you for repentance; do not waste it in vain pursuits."

"Through the toil of prayer and the anguish of your heart commune with those who are grieved at heart; and the Source of mercy will be opened up to your petitions."

"To bear a grudge and pray, means to sow seed on the sea and expect a harvest."

"To choose what is good belongs to the good will of the man who desires it; but to accomplish the choice of this good will belongs to God."

"Truly, confusion should be called (if permissible) the chariot of the devil, because Satan is always eager to mount upon it as a charioteer, and bearing with him the throng of the passions, he invades the wretched soul and plunges her into the pit of confusion."

"Until we find love, our labor is in the land of tares, and in the midst of tares we both sow and reap, even if our seed is the seed of righteousness."

"We should not be exceedingly grieved when we make a slip in some matter, but only if we persist in it; for even the perfect often slip, but to persist therein is total death."

"What is a merciful heart? It is a heart on fire for the whole of creation, for humanity, for the birds, for the animals, for demons, and for all that exists. By the recollection of them the eyes of a merciful person pour forth tears in abundance. By the strong and vehement mercy that grips such a person’s heart, and by such great compassion, the heart is humbled and one cannot bear to hear or to see any injury or slight sorrow in any in creation. For this reason, such a person offers up tearful prayer continually even for irrational beasts, for the enemies of the truth, and for those who harm her or him, that they be protected and receive mercy. And in like manner such a person prays for the family of reptiles because of the great compassion that burns without measure in a heart that is in the likeness of God."

"What is so bitter and vehement as the torment of love? I mean, those who have become conscious that they have sinned against love suffer greater torment from this than from any fear of punishment. For the sorrow caused in the heart by sin against love is more poignant than any torment."

"What is the sign that a man has attained to purity of heart, and when does a man know that his heart has entered into purity? When he sees all men as good and none appears to him to be unclean and defiled, then in very truth his heart is pure. Our soul cannot yield spiritual fruit unless our heart is dead to the world. Blessed is the man who realizes his weakness, for this knowledge becomes the foundation, the root and the beginning of every boon. For as soon as a man understands and truly feels his weakness, he immediately puts a restraint on the vain pride of his soul which obscures reason, and thus he gains protection."

"When a man comes to know that he can fall away from God as a dry leaf falls from a tree, then he knows the power of his soul."

"When a sailor voyages in the midst of the sea, he watches the stars and in relation to them he guides his ship until he reaches harbor. But a monk watches prayer, because it sets him right and directs his course to that harbor toward which his discipline should lead. A monk gazes at prayer at all times, so that it might show him an island where he can anchor his ship and take on provisions; then once more he sets his course for another island. Such is the voyage of a monk in this life: he sails from one island to another, that is, from knowledge to knowledge, and by his successive change of islands, that is, of states of knowledge, he progresses until he emerges from the sea and his journey attains to that true city, whose inhabitants no longer engage in commerce but each rests upon his own riches. Blessed is the man who has not lost his course in this vain world, on this great sea! Blessed is the man whose ship has not broken up and who has reached harbor with joy!"

"When temptation overtakes the deceitful man, he does not have the presence of mind to call upon God, or to expect salvation from Him, since in the days of his ease he stood aloof from God's will."

"When you approach your bed, say to it, 'This very night, perchance, you will be my tomb, O bed; for I know not whether tonight instead of a transient sleep, the eternal sleep of death will be mine.' And so, as long as you have feet, run after work, before you are bound with that bond which cannot be loosed again once it is put on."

"When you fall down before God in prayer, become in your thought like an ant, like the creeping things of the earth, like a leech, and like a tiny lisping child. Do not say anything before Him with knowledge, but with a child's manner of thought draw near to God and walk before Him, that you may be counted worthy of that paternal providence which fathers have for their small children."

"Whenever in your path you find unchanging peace, beware: you are very far from the divine paths trodden by the weary feet of the saints. For as long as you are journeying in the way to the city of the Kingdom and are drawing near the city of God, this will be a sign for you: the strength of the temptations that you encounter. And the nearer you draw close and progress, the more temptations will multiply against you."

"Whenever you wish to make a beginning in some good work, first prepare yourself for the temptations that will come upon you, and do not doubt the truth."

"Who does not love a humble and meek man? Only proud men and slanderers, who are foreign to his work."

"Why do you increase your bonds? Take hold of your life before your light grows dark and you seek help and do not find it. This life has been given to you for repentance; do not waste it in vain pursuits."

"Why do you trouble yourself in a house that is not your own? Let the sight of a dead man be a teacher for you concerning your departure from hence."

"Works and deeds gain passionlessness for the soul . . . and give quietness from thoughts when we acquire silence . . . Otherwise success is not possible. For if a tree is watered every day, can its root wither? Does water ever get less in a vessel if more is added daily? But when a man gains silence, his soul readily discerns passions, and the inner man, roused to spiritual work, overcomes them and, from day to day, lifts the soul nearer to purity."

"Worldly glory is a reef in the sea covered by water; for as this lies unknown to the sailor until his vessel strikes it, cracks up, is filled with water and sinks, so vain glory does to a man until it drowns and destroys him."