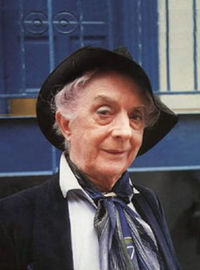 English Writer,Raconteur and Gay Icon after publication of his memoir, The Naked Civil Servant

"I still lived in the future--a habit which is the death of happiness."

"The very purpose of existence is to reconcile the glowing opinion we hold of ourselves with the appalling things that other people think about us."

"To be a man of destiny is to arrive at a point in history when the only gift you have to offer has suddenly become relevant."

"Even a monotonously undeviating path of self-examination does not necessarily lead to self-knowledge. I stumble towards my grave confused and hurt and hungry."

"Even hooligans marry, though they know that marriage is for a little while. It is alimony that is forever."

"Exhibitionism is like a drug. Hooked in adolescence I was now taking doses so massive they would have killed a novice."

"Fashion is what you adopt when you don't know who you are."

"An autobiography is obituary in serial form with the last installment missing."

"All the golden societies of the past to which historians point and turn their wistful smiles have had what patience-players would call a discard pile. They operated on two levels with a slave class who worked, ate, slept, and died and a leisured class who reclined on one elbow and spoke. Naturally it is from this latter group that we learn what life at that time was like. It often makes charming reading but we can hardly take it to be the whole truth."

""You'll never be wanted," [a draft board official] said, and thrust at me a smaller piece of paper. This described me as being incapable of being graded in grades A, B, etc., because I suffered from sexual perversion. When the story of my disgrace became one of the contemporary fables of Chelsea, a certain Miss Marshall said, "I don't much care for the expression 'suffering from.' Shouldn't it be 'glorying in'?""

"Another friend began to say, "Well, Quentin has a problem of adjusting himself to society and he..." This sentence was never finished. The ballet teacher expostulated, "I don't agree. Quentin does exactly as he pleases. The rest of us have to adapt ourselves to him.""

"For an introvert his environment is himself and can never be subject to startling or unforeseen change."

"I am unable to believe in a God susceptible to prayer. I simply haven't the nerve to imagine a being, a force, a cause which keeps the planets revolving in their orbits, and then suddenly stops in order to give me a bicycle with three speeds."

"I found that I had become so spinsterish that I was made neurotic not only by my life of domesticity but by the slightest derangement of my room. I would burst into a fit of weeping if the kettle was not facing due east."

"I like living in one room and have never known what people do with the room they are not in."

"I now realize that education is a last wild effort on the part of the authorities to prevent an overdose of leisure from driving the world mad. Learning is no longer an improver; it is merely the most expensive time-filler the world has ever known."

"I acquiesced in this on the grounds that the most anyone can expect from a holiday is a change of agony."

"I take it to be axiomatic that people are revolted by witnessing the shameless gratification of an appetite they do not share."

"If at first you don't succeed, failure may be your style."

"If I have any talent at all, it is not for doing but for being."

"I was amazed to receive later a substantial sum for sitting in my room and talking about myself. If only I could get some of the back pay!"

"If love means anything at all it means extending your hand to the unlovable."

"It would be impossible to get through the kind of life that I have known without accumulating a vast unused stockpile of rage. Retaliation, though, was a luxury I could never afford. On the physical level I was too feeble. On any other I was not rich enough. I never dared to be rude to anyone. I never knew that I might not need him later. Long after fantasies of sexual excess had ceased to torment me, my imagination was inflamed by lurid day-dreams of having my revenge on the world."

"Is not the whole world a vast house of assignation of which the filing system has been lost?"

"It's been agony but I couldn't have done it any other way."

"In an expanding universe, time is on the side of the outcast. Those who once inhabited the suburbs of human contempt find that without changing their address they eventually live in the metropolis."

"Life was a funny thing that happened to me on the way to the grave."

"Keeping up with the Joneses was a full-time job with my mother and father. It was not until many years later when I lived alone that I realized how much cheaper it was to drag the Joneses down to my level."

"Love is the extra effort we make in our dealings with those whom we do not like and once you understand that, you understand all. This idea that love overtakes you is nonsense. This is but a polite manifestation of sex. To love another you have to undertake some fragment of their destiny."

"Life is a game in which the rules are constantly changing; nothing spoils a game more than those who take it seriously."

"Living en famille provides the strongest motives for rudeness combined with the maximum opportunity for displaying it."

"Manners are love in a cool climate."

"Many [hooligans] discover to their shame that they have scruples; they have roots and, greatest disadvantage of all, they have hope. The fathers superior of the order do not try to influence their children in Satan; they merely shake their heads in sorrow. They know that the apostate must work out his own damnation."

"Mass-murderers are simply people who have had ENOUGH."

"Muddled syntax is the outward and audible sign of confused minds, and the misuse of grammar the result of illogical thinking."

"My mother protected me from the world and my father threatened me with it."

"Never keep up with the Joneses. Drag them down to your level. It's cheaper."

"Nothing in our culture, not even home computers, is more overrated than the epidermal felicity of two featherless bipeds in desperate congress."

"Nothing more rapidly inclines a person to go into a monastery than reading a book on etiquette. There are so many trivial ways in which it is possible to commit some social sin."

"Our clothes are too much a part of us for most of us ever to be entirely indifferent to their condition: it is as though the fabric were indeed a natural extension of the body, or even of the soul."

"Quentin Crisp (to handsome young man on the street): What's the matter, sexy? Don't you like dehydrated fruit?"

"Of course I lie to people. But I lie altruistically -- for our mutual good. The lie is the basic building block of good manners. That may seem mildly shocking to a moralist -- but then what isn"