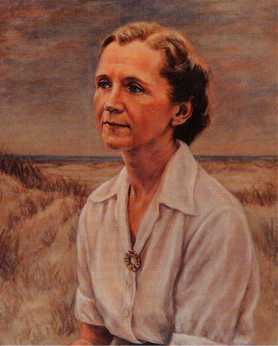 American Conservationist, Marine Biologist and Author, best known for advancing the Global Environmental Movement and for her book "Silent Spring "

"The more clearly we can focus our attention on the wonders and realities of the universe about us, the less taste we shall have for destruction."

"I believe natural beauty has a necessary place in the spiritual development of any individual or any society. I believe that whenever we destroy beauty, or whenever we substitute something man-made and artificial for a natural feature of the earth, we have retarded some part of man’s spiritual growth."

"The history of life on earth has been a history of interaction between living things and their surroundings. To a large extent, the physical form and the habits of the earth’s vegetation and its animal life have been molded by the environment. Considering the whole span of earthly time, the opposite effect, in which life actually modifies its surroundings, has been relatively slight. Only within the moment of time represented by the present century has one species – acquired significant power to alter nature of his world."

"Lulled by the soft sell and the hidden persuader, the average citizen is seldom aware of the deadly materials with which he is surrounding himself; indeed, he may not realize he is using them at all."

"The control of nature is a phrase conceived in arrogance, born of the Neanderthal age of biology and philosophy, when it was supposed that nature exists for the convenience of man. The concepts and practices of applied entomology for the most part date from that Stone Age of science. It is our alarming misfortune that so primitive a science has armed itself with the most modem and terrible weapons, and that in turning them against the insects it has also turned them against the earth."

"For mankind as a whole, a possession infinitely more valuable than individual life is our genetic heritage, our link with past and future. Shaped through long eons of evolution, our genes not only make us what we are, but hold in their minute beings the future – be it one of promise or threat. Yet genetic deterioration through manmade [chemical and radioactive] agents is the menace of our time, “the last and greatest danger to our civilization.”"

"A Who's Who of pesticides is therefore of concern to us all. If we are going to live so intimately with these chemicals eating and drinking them, taking them into the very marrow of our bones - we had better know something about their nature and their power."

"An era dominated by industry, in which the right to make money, at whatever cost to others, is seldom challenged."

"And so in my mind's eye these coastal forms merge and blend in a shifting, kaleidoscopic pattern in which there is no finality, no ultimate and fixed reality - earth becoming fluid as the sea itself."

"As crude a weapon as the cave man's club, the chemical barrage has been hurled against the fabric of life - a fabric on the one hand delicate and destructible, on the other miraculously tough and resilient, and capable of striking back in unexpected ways. These extraordinary capacities of life have been ignored by the practitioners of chemical control who have brought to their task no high-minded orientation, no humility before the vast forces with which they tamper."

"Because I was providing parts that weren't available anywhere in the world, within two years it became international and in the last four years I think I've penetrated 23 countries."

"Beginnings are apt to be shadowy and so it is the beginnings of the great mother life, the sea."

"But man is a part of nature, and his war against nature is inevitably a war against himself."

"Down on the shore we have savored the smell of low tide-that marvelous evocation combined of many separate odors, of the world of seaweeds and fishes and creatures of bizarre shape and habit, of tides rising and falling on their appointed schedule, of exposed mud flats and salt rime drying on the rocks. I hope [my nephew] Roger will later experience, as I do, the rush of remembered delight that comes with the first breath of that scent, drawn into one's nostrils as one returns to the sea after a long absence."

"Even in the vast and mysterious reaches of the sea we are brought back to the fundamental truth that nothing lives to itself."

"For all at last returns to the sea -- to Oceanus, the ocean river, like the ever-flowing stream of time, the beginning and the end."

"For the first time in the history of the world, every human being is now subjected to contact with dangerous chemicals, from the moment of conception until death."

"For the sense of smell, almost more than any other, has the power to recall memories and it is a pity that you use it so little."

"Here and there awareness is growing that man, far from being the overlord of all creation, is himself part of nature, subject to the same cosmic forces that control all other life. Man's future welfare and probably even his survival depend upon his learning to live in harmony, rather than in combat, with these forces."

"I like to define biology as the history of the earth and all its life; past, present, and future."

"I sincerely believe that for the child, and for the parent seeking to guide him, it is not half so important to know as to feel... Once the emotions have been aroused "

"I think we're challenged, as mankind has never been challenged before, to prove our maturity and our mastery, not of nature but ourselves."

"If a child is to keep alive his inborn sense of wonder without any such gift from the fairies, he needs the companionship of at least one adult who can share it, rediscovering with him the joy, excitement and mystery of the world we live in."

"If facts are the seeds that later produce knowledge and wisdom, then the emotions and the impressions of the senses are the fertile soil in which the seeds must grow."

"If I had influence with the good fairy who is supposed to preside over the christening of all children I should ask that her gift to each child in the world be a sense of wonder so indestructible that it would last throughout life, as an unfailing antidote against the boredom and disenchantments of later years, the sterile preoccupation with things artificial, the alienation from the sources of our strength."

"If there is poetry in my book about the sea, it is not because I deliberately put it there, but because no one could write truthfully about the sea and leave out the poetry."

"In an age when man has forgotten his origins and is blind even to his most essential needs for survival, water along with other resources has become the victim of his indifference."

"In every outthrust headland, in every curving beach, in every grain of sand there is the story of the earth."

"In nature nothing exists alone"

"It is a curious situation that the sea, from which life first arose should now be threatened by the activities of one form of that life. But the sea, though changed in a sinister way, will continue to exist; the threat is rather to life itself."

"It is a wholesome and necessary thing for us to turn again to the earth and in the contemplation of her beauties to know the sense of wonder and humility."

"It is ironic to think that man might determine his own future by something so seemingly trivial as the choice of an insect spray."

"It is not half so important to know as to feel."

"It is the public that is being asked to assume the risks...the public must decide whether it wishes to continue on the present road and it can only do so when in full possession of the facts."

"It occurred to me that if this were a sight that could be seen only once in a century, this little headland would be thronged with spectators."

"Like the resource it seeks to protect, wildlife conservation must be dynamic, changing as conditions change, seeking always to become more effective."

"Millions of stars blazed in darkness, and on the far shore a few lights burned in cottages. Otherwise there was no reminder of human life."

"My companion and I were alone with the stars: the misty river of the Milky Way flowing across the sky, the patterns of the constellations standing out bright and clear, a blazing planet low on the horizon."

"No witchcraft, no enemy action had silenced the rebirth of new life in this stricken world. The people had done it themselves."

"One summer night, out on a flat headland, all but surrounded by the waters of the bay, the horizons were remote and distant rims on the edge of space. Millions of stars blazed in darkness, and on the far shore a few lights burned in cottages. Otherwise there was no reminder of human life. My companion and I were alone with the stars: the misty river of the Milky Way flowing across the sky, the patterns of the constellations standing out bright and clear, a blazing planet low on the horizon. It occurred to me that if this were a sight that could be seen only once in a century, this little headland would be thronged with spectators. But it can be seen many scores of nights in any year, and so the lights burned in the cottages and the inhabitants probably gave not a thought to the beauty overhead; and because they could see it almost any night, perhaps they never will."

"One way to open your eyes is to ask yourself, 'What if I had never seen this before? What if I knew I would never see it again?'"

"Only within the moment of time represented by the present century has one species -- man -- acquired significant power to alter the nature of his world."

"Over increasingly large areas of the United States, spring now comes unheralded by the return of the birds, and the early mornings are strangely silent where once they were filled with the beauty of bird song."

"The aim of science is to discover and illuminate truth. And that, I take it, is the aim of literature, whether biography or history or fiction. It seems to me, then, that there can be no separate literature of science."

"The current vogue for poisons has failed utterly to take into account these most fundamental considerations. As crude a weapon as the cave man's club, the chemical barrage has been hurled against the fabric of life a fabric on the one hand delicate and destructible, on the other miraculously tough and resilient, and capable of striking back in unexpected ways. These extraordinary capacities of life have been ignored by the practitioners of chemical control who have brought to their task no high-minded orientation, no humility before the vast forces with which they tamper."

"The discipline of the writer is to learn to be still and listen to what his subject has to tell him."

"The lasting pleasures of contact with the natural world are not reserved for scientists but are available to anyone who will place himself under the influence of earth, sea and sky and their amazing life."

"The more I learned about the use of pesticides, the more appalled I became. I realized that here was the material for a book. What I discovered was that everything which meant most to me as a naturalist was being threatened, and that nothing I could do would be more important."

"The public must decide whether it wishes to continue."