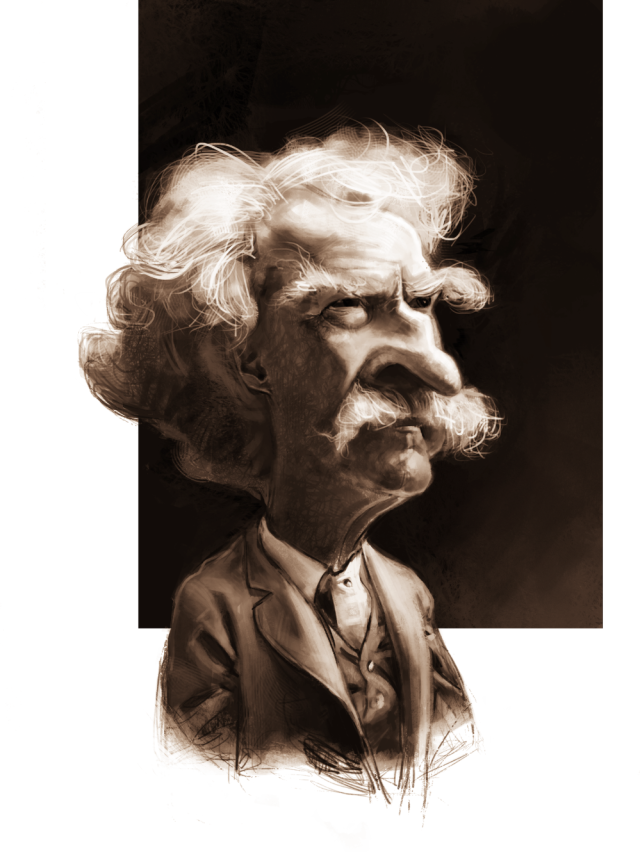 "If man could be crossed with a cat, it would improve man but deteriorate the cat."

"If man had created man, he would be ashamed of his performance."

"If I were to construct a God I would furnish Him with some way and qualities and characteristics which the Present lacks."

"If that I could but clothe me in raiment like to thine, and strip my feet, and revel in the mud once, just once, with none to rebuke me or forbid, meseemeth I could forego the crown!"

"If the desire to kill and the opportunity to kill came always together, who would escape hanging?"

"If the man doesn?t believe as we do, we say he is a crank, and that settles it. I mean, it does nowadays, because now we can?t burn him."

"If the reader thinks he is done, now, and that this book has no moral to it, he is in error. The moral of it is this: If you are of any account, stay at home and make your way by faithful diligence; but if you are no account, go away from home, and then you will ?have? to work, whether you want to or not. Thus you become a blessing to your friends by ceasing to be a nuisance to them - if the people you go among suffer by the operation."

"If the statistics are right, the Jews constitute but one percent of the human race. It suggests a nebulous dim puff of star dust lost in the blaze of the Milky Way. Properly the Jew ought hardly to be heard of, but he is heard of, has always been heard of. He is as prominent on the planet as any other people, and his commercial importance is extravagantly out of proportion to the smallness of his bulk. His contributions to the world's list of great names in literature, science, art, music, finance, medicine, and abstruse learning are also away out of proportion to the weakness of his numbers. He has made a marvellous fight in the world, in all the ages; and has done it with his hands tied behind him. He could be vain of himself, and be excused for it. The Egyptian, the Babylonian, and the Persian rose, filled the planet with sound and splendor, then faded to dream-stuff and passed away; the Greek and the Roman followed, and made a vast noise, and they are gone; other peoples have sprung up and held their torch high for a time, but it burned out, and they sit in twilight now, or have vanished. The Jew saw them all, beat them all, and is now what he always was, exhibiting no decadence, no infirmities of age, no weakening of his parts, no slowing of his energies, no dulling of his alert and aggressive mind. All things are mortal but the Jew; all other forces pass, but he remains. What is the secret of his immortality?"

"If the world comes to an end, I want to be in Cincinnati. Everything comes there ten years later."

"If the writer doesn't sweat, the reader will."

"If there is no smoking in heaven, I'm not interested."

"If she were drowning I would not look?but I would not pull her out. I would not be a party to that last and meanest unkindness, treachery to a would-be suicide. My sympathies have been with the suicides for many, many years. I am always glad when the suicide succeeds in his undertaking. I always feel a genuine pain in my heart, a genuine grief, a genuine pity, when some scoundrel stays the suicide's hand and compels him to continue his life."

"If people are good only because they fear punishment, and hope for reward, then we are a sorry lot indeed."

"If there is one thing that will make a man peculiarly and insufferable self-conceited, it is to have his stomach behave itself, the first day at sea, when nearly all his comrades are seasick."

"If they had not landed there would be some reason for celebrating the fact."

"If to be interesting is to be un-commonplace, it is becoming a question with me, if there are any commonplace people."

"If voting made any difference they wouldn't let us do it."

"If we should deal out justice only, in this world, who would escape? No, it is better to be generous, and in the end more profitable, for it gains gratitude for us, and love."

"If we would learn what the human race really is at bottom, we need only observe it in election times."

"If you are speaking the truth you don't have to remember anything."

"If you are with the quality, or at a funeral, or trying to go to sleep when you ain't sleepy - if you are anywheres where it won't do for you to scratch, why you will itch all over in upwards of a thousand places."

"If you can't get a compliment any other way, pay yourself one."

"If you can't stand solitude, perhaps others find you boring as well."

"If you do what you've always done, you'll get what you always got."

"If you don't know how to pronounce a word, say it loudly. Do not compound mispronunciation with inaudibility"

"If you don't know where you're going, any road will get you there."

"If you don't like the weather in New England now, just wait a few minutes."

"If you have nothing to say, say nothing."

"If you have to swallow a frog, don't stare at it too long."

"If you hold a cat by the tail you learn things you cannot learn any other way."

"If you must be indiscrete, be discrete in your indiscretion."

"If you say the truth you don't have to remember anything."

"If you send a damned fool to St. Louis, and you don't tell them he's a damned fool, they'll never find out."

"If you shamefully misuse a cat once she will always maintain a dignified reserve toward you afterward. You will never get her full confidence again."

"If you tell the truth you do not need a good memory!"

"If you want me to give you a two-hour presentation, I am ready today. If you want only a five-minute speech, it will take me two weeks to prepare."

"If your mother tells you to do a thing, it is wrong to reply that you won't. It is better and more becoming to intimate that you will do as she bids you, and then afterward act quietly in the matter according to the dictates of your best judgment."

"If you've got a nice fresh corpse, fetch him out!"

"Ignorant people think it is the noise which fighting cats make that is so aggravating, but it ain''t so; it is the sickening grammar that they use."

"I'll not go where there is any of that sort of thing going on, again. It's the sure way, and the only sure way;"

"I'll risk forty dollars that he can outjump any frog in Calaveras county."

"I'm glad I did it, partly because it was worth it, but mostly because I shall never have to do it again."

"I'm quite sure that ... I have no race prejudices, and I think I have no color prejudices nor caste prejudices nor creed prejudices. Indeed, I know it. I can stand any society. All that I care to know is that a man is a human being--that is enough for me he can't be any worse."