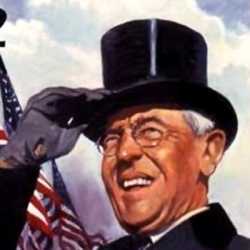 "A great industrial nation is controlled by its system of credit. Our system of credit is privately concentrated. The growth of the nation, therefore, and all our activities are in the hands of a few men who, even if their action be honest and intended for the public interest, are necessarily concentrated upon the great undertakings in which their own money is involved and who necessarily, by very reason of their own limitations, chill and check and destroy genuine economic freedom. This is the greatest question of all, and to this statesmen must address themselves with an earnest determination to serve the long future and the true liberties of men."

"A friend of mine says that every man who takes office in Washington either grows or swells, and when I give a man an office, I watch him carefully to see whether he is swelling or growing."

"A great nation is not led by a man who simply repeats the talk of the street-corners or the opinions of the newspapers. A nation is led by a man who hears more than those things; or who, rather, hearing those things, understands them better, unites them, puts them into a common meaning; speaks, not the rumors of the street, but a new principle for a new age; a man in whose ears the voices of the nation do not sound like the accidental and discordant notes that come from the voice of a mob, but concurrent and concordant like the united voices of a chorus, whose many meanings, spoken by melodious tongues, unite in his understanding in a single meaning and reveal to him a single vision, so that he can speak what no man else knows, the common meaning of the common voice. Such is the man who leads a great, free, democratic nation."

"A conservative is someone who makes no changes and consults his grandmother when in doubt."

"A little group of willful men, representing no opinion but their own, have rendered the great Government of the United States helpless and contemptible."

"A man is the part he plays among his fellows. He is not isolated; he cannot be. His life is made up of the relations he bears to others - is made or marred by those relations, guided by them, judged by them, expressed in them. There is nothing else upon which he can spend his spirit - nothing else that we can see. It is by these he gets his spiritual growth; it is by these we see his character revealed, his purpose, his gifts. A few (men) act as those who have mastered the secrets of a serious art, with deliberate subordination of themselves to the great end and motive of the play. These have "found themselves," and have all the ease of a perfect adjustment."

"A radical is one of whom people say He goes too far. A conservative, on the other hand, is one who doesn't go far enough. Then there is the reactionary, one who doesn't go at all. All these terms are more or less objectionable, wherefore we have"

"A man who thinks of himself as belonging to a particular national group in America has not yet become an American. And the man who goes among you to trade upon your nationality is no worthy son to live under the Stars and Stripes."

"A man's rootage is more important than his leafage"

"Absolute identity with one's cause is the first and great condition of successful leadership."

"Adventurers swarmed out of the North, as much the enemies of one race as of the other, to cozen, beguile and use the negroes. The white men were aroused by a mere instinct of self-preservation — until at last there sprung into existence a great Kuklux Klan, a veritable empire of the South, to protect the Southern country."

"All that progressives ask or desire is permission — in an era when "development," "evolution," is the scientific word — to interpret the Constitution according to the Darwinian principle; all they ask is recognition of the fact that a nation is a living thing and not a machine."

"Again and again mothers who lost their sons in France have come to me, and, taking my hand, have not only shed tears upon it, but they have added, `God bless you, Mr. President! Why should they pray God to bless me? I advised the Congress to create the situation that led to the death of their sons. I ordered their sons overseas. I consented to their sons' being put in the most difficult part of the battle line, where death was certain...Why should they weep upon my hand and call down the blessings of God upon me? Because they believe that their boys died for something that vastly transcends any of the immediate and palpable objects of the war. They believe, and rightly believe, that their sons saved the liberty of the world."

"All the peoples of the world are in effect partners in this interest, and for our own part we see very clearly that unless justice be done to others it will not be done to us."

"All things come to him who waits -- provided he knows what he is waiting for."

"America is not a mere body of traders; it is a body of free men. Our greatness is built upon our freedom -- is moral, not material. We have a great ardor for gain; but we have a deep passion for the rights of man."

"America cannot be an ostrich with its head in the sand"

"America lives in the heart of every man everywhere who wishes to find a region where he will be free to work out his destiny as he chooses."

"America was established not to create wealth but to realize a vision, to realize an ideal - to discover and maintain liberty among men."

"American industry is not free, as once it was free; American enterprise is not free; the man with only a little capital is finding it harder to get into the field, more and more impossible to compete with the big fellow. Why? Because the laws of this country do not prevent the strong from crushing the weak. That is the reason, and because the strong have crushed the weak the strong dominate the industry and the economic life of this country. No man can deny that the lines of endeavor have more and more narrowed and stiffened; no man who knows anything about the development of industry in this country can have failed to observe that the larger kinds of credit are more and more difficult to obtain, unless you obtain them upon the terms of uniting your efforts with those who already control the industries of the country; and nobody can fail to observe that any man who tries to set himself up in competition with any process of manufacture which has been taken under the control of large combinations of capital will presently find himself either squeezed out or obliged to sell and allow himself to be absorbed."

"As compared with the college politician, the real article seems like an amateur."

"And let me again remind you that it is only by working with an energy which is almost superhuman and which looks to uninterested spectators like insanity that we can accomplish anything worth the achievement."

"At last a vision has been vouchsafed us of our life as a whole. We see the bad with the good, the debased and decadent with the sound and vital. With this vision we approach new affairs. Our duty is to cleanse, to reconsider, to restore, to correct the evil without impairing the good, to purify and humanize every process of our common life without weakening or sentimentalizing it. There has been something crude and heartless and unfeeling in our haste to succeed and be great. Our thought has been "Let every man look out for himself, let every generation look out for itself," while we reared giant machinery which made it impossible that any but those who stood at the levers of control should have a chance to look out for themselves. We had not forgotten our morals. We remembered well enough that we had set up a policy which was meant to serve the humblest as well as the most powerful, with an eye single to the standards of justice and fair play, and remembered it with pride. But we were very heedless and in a hurry to be great."

"Better a thousand times to go down fighting than to dip your colors to dishonorable compromise."

"At every crisis in one's life, it is absolute salvation to have some sympathetic friend to whom you can think aloud without restraint or misgiving."

"Big business is not dangerous today because it is big, but because its bigness is an unwholesome inflation created by privileges and exemptions which it ought not to enjoy."

"Because I love the South, I rejoice in the failure of the Confederacy."

"Business underlies everything in our national life, including our spiritual life. Witness the fact that in the Lord's Prayer, the first petition is for daily bread. No one can worship God or love his neighbor on an empty stomach."

"By 'radical,' I understand one who goes too far; by 'conservative,' one who does not go far enough; by 'reactionary,' one who won't go at all."

"But the right is more precious than peace, and we shall fight for the things which we have always carried nearest our hearts--for democracy, for the right of those who submit to authority to have a voice in their own Governments, for the rights and liberties of small nations, for a universal dominion of right by such a concert of free peoples as shall bring peace and safety to all nations and make the world itself at last free."

"Caution is the confidential agent of selfishness."

"But the Constitution of the United States is not a mere lawyers' document: it is a vehicle of life, and its spirit is always the spirit of the age."

"Conservatism is the policy of making no changes and consulting your grandmother when in doubt."

"Democracy is not so much a form of government as a set of principles."

"Do you never stop to reflect just what it is that America stands for? If she stands for one thing more than another, it is for the sovereignty of self-governing peoples, and her example, her assistance, her encouragement, has thrilled two continents in this Western World with all the fine impulses which have built up human liberty on both sides of the water."

"Every great man of business has got somewhere a touch of the idealist in him."

"Fear God and you need not fear anyone else."

"Every man who takes office in Washington either grows or swells, and when I give a man an office, I watch him carefully to see whether he is growing or swelling."

"Everyone at the bottom of his heart cherishes vanity; even the toad thinks himself good-looking,--"rather tawny perhaps, but look at his eye!""

"For the interesting and inspiring thing about America, gentlemen, is that she asks nothing for herself except what she has a right to ask for humanity itself."

"Generally young men are regarded as radicals. This is a popular misconception. The most conservative persons I ever met are college undergraduates. The radicals are the men past middle life."

"Genius is divine perseverance. Genius I cannot claim nor even extra brightness but perseverance all can have."

"Golf is a game in which one endeavors to control a ball with implements ill adapted for the purpose."